Finding holistic health solutions for depression may not seem an easy task. Therefore, people who suffer nervous breakdowns are more likely to depend on smoking as a way to ‘ease the stress’ than others. Can this really work though? Read on to find out…

Over the years, there’s been an unending debate on the health implications of vaporisers and other smoking alternatives. However, one of the most important topics is regularly neglected; this concerns the effects of these alternatives to the mental well-being of a user.

Studies have shown that nicotine helps reduce the stress that accompanies a wide range of mental and emotional health conditions like Schizophrenia, panic disorders and most importantly, depression.

Since time immemorial, nicotine has been used in the treatment of several nervous problems. This is because when consumed, it aligns with certain receptors in the nervous system – hereby triggering dopamine, serotonin and many other neurotransmitters that are subsequently released. This helps to keep the user excited and elated – both of which are considered benefits.

More research shows that people suffering from depression and anxiety tend to be more addicted to smoking and find it hard to quit – as compared to those who smoke occasionally.

A survey conducted  by the CDCP found that more than 30% of cigarettes smoked in America were consumed by people with emotional and mental health issues. There’s also a high percentage of people suffering from depression and other nervous disorders that are dependent on smoking.

However, many organisations – including some of the big names in tobacco – are introducing vaporisers, e-cigarettes and other NRTs (Nicotine Replacement Therapies) as a possible holistic solution or alternative to smoking addiction.

Although antidepressants and other drugs help with alleviating depression, dependence on smoking cannot be ignored. Sprays, patches, gums and numerous other aids reduce cravings for cigarettes, thereby helping them avoid the negative health implications of smoking tobacco. 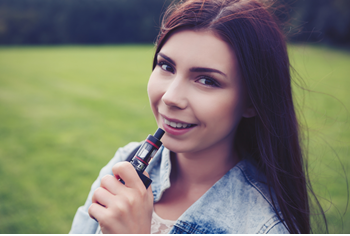 Neeraj Bhardwaj, Chief executive officer of Loto Labs (a company that invented the first magnetic induced vaporizer) said: “Vaporizers and e-cigarettes release a vapour that doesn’t have the carcinogens contained in tobacco.”

He also added that “these alternatives should be considered a welcome development, because some therapy centres give patients gums and patches. Therefore, vaporisers should also be an option – especially for people in closed wards or those who have been rehabilitated at home”.

However, some institutes and organisations that deal with emotional and mental issues are not convinced just yet. Director of Media Relations at the US chapter of the National Alliance on Mental Illness (NAMI), Bob Carolla, stated that the organisation has no standpoint as yet when it comes to alternative smoking tools. Nevertheless, he added that they are consulting experts in the field and also undertaking more research on the issue.

Vaping as an Alternative

Although more research is needed to determine the effects of vaping on mental and emotional health, it’s clear that this can have various positive benefits. Therefore, there are many reasons why it can be considered as an alternative to smoking, especially for people suffering from depression.

Notably, one study showed that the number of vaporiser and e-cigarette consumers has tripled since 2012, while another carried out in Italy also stated that alternative smoking could cut down a person’s average cigarette consumption and also reduce their symptoms of depression.

With these findings and likely conclusions, one can assume that vaping can actually reduce the symptoms of depression without having any adverse effects on the health of the user.

To have good dental health, it’s essential to take care of your teeth. While regular brushing and flossing are important, it’s also recommended that…