Brighton is an eclectic city for people with eclectic tastes. Walk down any street and you’ll see people dressed in every conceivable style with influences from all over the world. Our music scene is the same – Brighton music has so much to offer and caters to every taste. I caught up with one of Brighton’s oldest and best known metal bands XVLTR (Fifteen litre for those who don’t read Roman numerals!) and spoke to their lead singer Lee Standen about the band, how they’ve adapted since their formation over 12 years ago, and what challenges they face as a metal band in 2016 and I even snuck in a cheeky question about Lee’s famous brother from the TV show Vikings.

Can you give us a brief history of the band and how you formed?

The band was forged in the crucible of the old Hobgoblin pub during it’s heyday as a venue, at a time just post Numetal about 12 years ago. Andy and I worked there and Phil was there regularly. Andy met Damien while doing a metal/D+B crossover and Damien started drumming for us. We originally set out to try and give people something to go to club nights and move to and to be fair, we still do; it’s a theme that arches through everything we do.

Where did the name ‘XVLTR’ come from?

The name came from the sound of a Peterbuilt truck engine. Think Convoy / Optimus prime. It seemed to be the same key we were playing in at the time (we use quite a few samples) and a bit of research later turns out it’s a 15 litre engine. The name was numeralised to XVLTR to represent some kind of car badge for an E.P cover that never got used, but it looked cool so I guess it just stuck.

How has the Brighton metal scene changed since you started the band?

The Brighton metal scene has seen a lot of venues come and go over the last 10 years and bands too for that matter. The problem is they’ve mainly gone. The bands we’ve played with over the years have split apart and come back as something stronger or more modern with each incarnation as the members move about which is generally a good thing. We’ve changed along with them it happens and is unavoidable; if you can’t change or adapt then you kind of lose relevance. The sound we have is still what we set out to do but has ten years of everything else we’ve listened to and absorbed over the years. So we dabble in a little math metal but try and keep it groovy. I think a little doom has slipped in there along the way, and maybe some Andrew’s sisters. 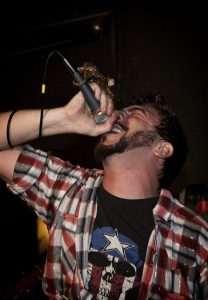 How has your style developed over the years?  Do you feel your newer songs differ noticeably from your older ones? 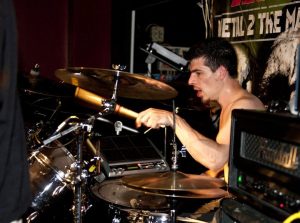 The newer stuff differs greatly from the old and generally bar a few fan favourites it’s mostly been dumped. We have been sometimes so lazy as a band gig wise we’ve dropped songs people never even heard because we’d got bored of playing them. Which I guess is our biggest fault. Things always seem to get in the way just as we pick up steam.

I know you’ve been together for a long time; what are some of the challenges you’ve had to face as a band over the years?

Over the years it’s been everything from illness, job demands, childbirth and death that have ground the juggernaut to a halt. But we’re still here and still going. I guess the biggest test of a band’s metal….pardon the pun, is time. You have to be one unit and friends through it as well; a lot of bands don’t have the longevity because of the people in them. People fuck up, people are annoying, people make mistakes and have priorities that change. If you can’t be flexible then it can’t work. It’s a bit like a marriage in that respect.

What would you say are the biggest obstacles for bands in 2016? 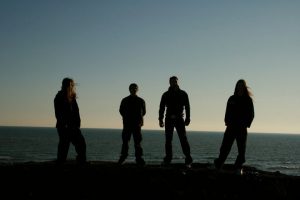 The biggest obstacle for a band in 2016. The business has changed to a model where you can get your stuff out there faster and further than before without having to sign over the rights to your music. The problem being, it’s very hard to make money from it. So the way forward seems to be to play shows, sell merch, get paid. Easier said than done when Venues seem to close at an alarming rate and a lot of folk can’t be away from a screen for more than 5 minutes. But as with all things talent, persistence and a lot of luck might just get you through.

Lastly I hear on the grapevine your lead singer is the brother of a famous Viking – what’s it like having him for a brother? 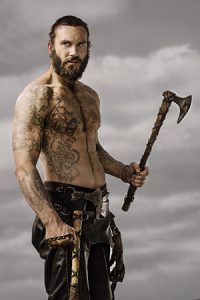 Ahh yes Clive he’s a good example of the above advice. He slogged away for years before a break this big happened so I’m very proud of him, he deserves it all. He brings me trophies back from places. Last week I got a Viking drinking horn from his Grimfrost sponsorship. Which has been put to good use and before that some of the furs from onset which now adorn my sofa. This is the first time I think he has walked away from a series with work to go into. This has posed difficulties as Vikings, even though filmed in Ireland, put strain on his family with him being away so often. This time he made the decision to move to Toronto for a year whilst filming the Taken series.  His family are going with him and I’ll miss seeing them. Clive has been a rock for me since my partner’s death. He was even there when I let go after she died in my arms to catch me, and spent the week after trying make my life more normal. Vikings were pretty understanding as he did go AWOL. But that’s just him. Contrary to his Vikings character he’s the best little brother I could have. He’s also wiser and more hardworking than me which is irksome.

As an artist, we are inspired by other artists as they stir something inside of us to create. Part of my creation process has…