As the world mourns the death of the iconic musician, the industry pays homage to David Bowie in all his manifestations.

Bowie sadly passed away during the final shows of London Collections, after a secret 18-month long battle with cancer.

In the wake of the influential star’s death, subtle tributes to the legend began to emerge in all forms, from the likes of leading designers, to the heavy-hearted attendees of the SS16 show.

As flocks of fashion press headed to the final shows of the London Collections, news rapidly spread of the musician’s sad departure. 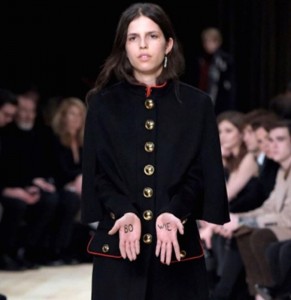 ‘Bowie’ was written across the palms of model Hayatt McCarthy, while other models had touches of Ziggy Stardust-esque glitter applied on their faces and under eyes.

According to Burberry’s brand representative, the act was one of a last minute decision and was instigated by the models in response to the news of the star’s passing.

An attendee of the show was also seen with a rosette pinned to his lapel, with Bowie’s picture printed in the centre. 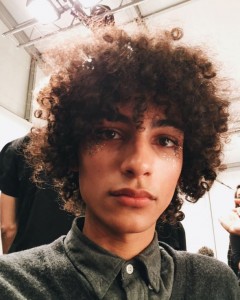 Other tributes were less intentional. This season, designer Katie Eary unveiled the collection that took heavy inspiration from ‘The Sacred Triangle’, a film documenting the parallel success of Bowie, Iggy Pop and Lou Reed.

Eary managed to pay perfect homage to Bowie while channelling the star’s most distinctive aesthetic in a prophetic tribute to the Ziggy Stardust era. The designer described being halfway through preparation for the show when she stumbled upon the 1970’s documentary – The Sacred Triangle.

The documentary explores the pivotal years in Bowie’s career alongside the parallel success of the intrinsically linked trio, Bowie, Reed & Pop.

Eary admits it was the idea of the three icons sharing and swapping clothing that became the visual reference point that inspired the entire collection. With an extreme nod to Ziggy’s Glam Rock style, models marched the catwalk dressed in loose silk shirts, crushed velvet jackets and metallic silver trousers. 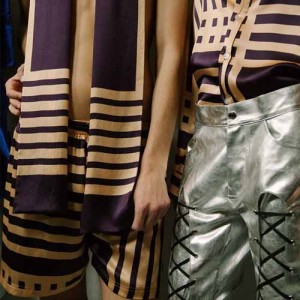 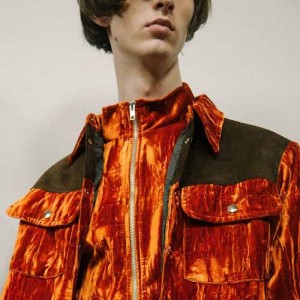 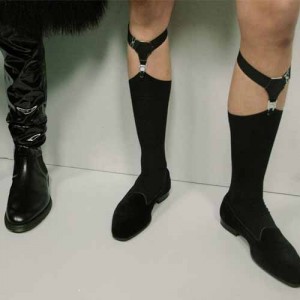 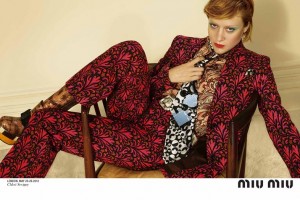 Bowie and McQueen previously collaborated while working on the musician’s tour costumes. Since the designer’s death, the fashion house has continued to reflect Bowie in their collections. In house designer Sarah Burton referenced the track ‘Changes’ from bestselling album ‘Hunky Dory’ as the starting point for her 2013 Cruise Collection. 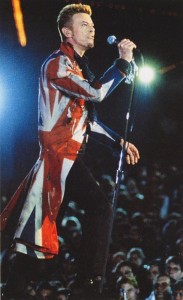 “Not heroic, but romantic. I think ‘Heroes’ is one of the most passionate songs ever, and I am passionate about this collection.” – Van Noten told Vogue

Redefining heroism and making it more humane, the entire collection was a huge reference to Star Man. Bowie (the Star Man himself) even gave Van Noten the track ‘Heroes’ to use and remix for his show. 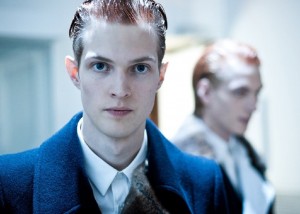 Gaultier honoured Bowie in a completely unsubtle reference at his SS13 show. With heavy cosmic prints and tight bodysuits paired with iconic red mullet wigs and the soundtrack being Bowies 80’s hit ‘Fashion’. 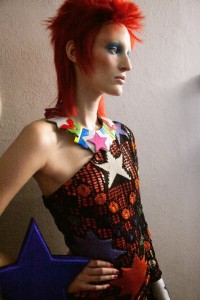 It’s been previously said that a majority of Pam Hogg’s design archives stem from a continuous re-imagining of the ‘typical’ Bowie attire. Her collections significantly emphasise his on-going influence. Hogg’s designs vary from 60’s visions of what the future may look like, to obvious appliqué  patches reading ‘Diamond Dogs’ that were added to trench coats. 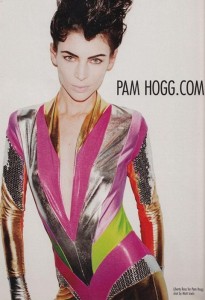 Said to be one of the fashion industry’s most experimental designers, the designer’s Aladdin Sane references were un-missable throughout his AW13 show.

“Bowie made me think and reflect about clothes, and the immense power they can possess,”

Beirendonck was also seen carrying a lightning bolt through his complete collection. 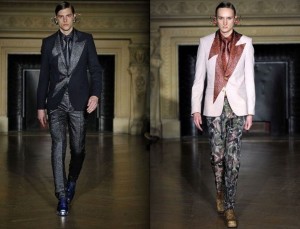 Previous to viewing the 1971 Yamamoto fashion show, Bowie was eagar to wear Kansai’s designs on stage.

“David Bowie and I combined the worlds of seeing and sound, musicians who want to be number one, want to wear the number one.”

It wasn’t until 1973 that the two collaborated on the iconic kimonos and bodysuits worn throughout the entire Ziggy Stardust world tour. It is reported Bowie had pre planned his funeral in advance as many celebrities have been doing in recent years. 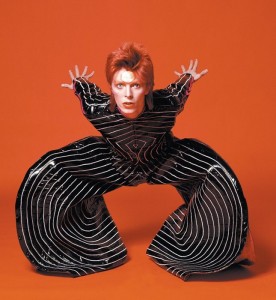 Eloise writes for Beauty and Ruin.

Last month I was approached by an online magazine, Cliché Magazine, to be their ‘Blogger of the Month’ in the October/November issue. I literally could…