To tie-in with our weekly guest blogger Xarah Xavier’s ongoing series of blogs focusing on her move from Brighton to the bright lights of L.A. Beauty and Ruin was lucky enough to interview her husband and ex-Placebo drummer Steve Forrest. Here’s Steve on his career so far and his hopes and dreams for him and Xarah:

It’s safe to say you’re probably best known for your work as a drummer for Placebo. What was your previous musical background?

Music for me began at a very early age. By the time I was 8 years old, I was already obsessed with the drums, and listening to all of my parent’s music and the drummers in those bands was all very exciting for me. Only thing is, we couldn’t afford a drum kit. Money was scarce in those days, and my parents were struggling to even keep on the lights at times, so spending $500-$1,000 on a drum kit for your kid wasn’t really the most practical thing for them to do. However, one day when I was 11, my father took me out to help him sell off a dirt bike we had. After which, he drove me straight to the music shop and bought me my very first drum kit! It wasn’t much, just a little Yamaha stackable travel kit, but it did the trick! Eventually I would move on to own all sorts of different drum kits over the years, and play with many bands as well. (My first band was a Nirvana tribute act when I was 13… haha) 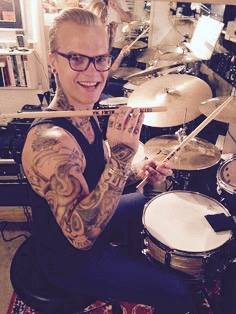 How did you begin your career with Placebo?

My career with Placebo started with my career in Evaline. Evaline was a group consisting of myself, and four of my mates out of Turlock CA. We started in my garage in the summer of 2001, and from there went on to sign a record contract with Maverick records, soon to sell us to Warner Bros. records. At this time, we were doing a number of festival runs and support slots. One of the bands we supported was Placebo, and we bonded with the guys instantly. A few months later, me and Evaline parted ways, and whilst out on tour with my friends “We Are The Fury” (now Jeremy & The Harlequins), my mother calls me up and tells me Placebo was without drummer. So next thing I knew I was on the phone with Brian Molko chatting about musical influences, the band, life, love, etc.. We really had a strong bond straight out the gate me and Brian; I always felt really close to him, especially in those early days… Anyways, four months later on January 12th, 2008 at 21 years of age, I landed in London, and for 7 great years I would see, hear, taste, smell, and experience those most amazing things this world had to offer.

So you left placebo to pursue your own personal musical ambitions, was that a hard decision to make?

Extremely hard decision to make. I loved that band and still do… It’s a hard one to talk about because you never really know what you can and cannot say about a person or a situation, but what I can say is that my time with Placebo was amazing. I loved every member of our awesome crew, I loved the hard working cats in our management, and most of all I truly loved my bandmates. Miscommunication, and egos got in the way of a lot in the end, and when that happens, it’s very hard to keep it going. We had taken our personal journey as far as it could go, and as hard as it was for me to go, I feel it was the best move in the long run for not only myself, but for my brothers as well.

At what age did you learn to pay the drums?

I was 9 or 10 when I received my very first drum. It was just a snare drum with an old pair of marching sticks. I used to throw a towel over the drum so as to dampen the sound and play along to the radio. I was immediately hooked. 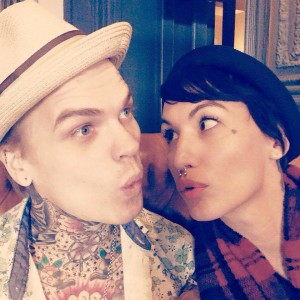 So you’re currently living in LA, are you excited for your wife Xarah Xavier to be joining you?

Very much so, yes. This past year in Brighton has been the toughest year that I can possibly remember having. For both myself and Xa, life has been seemingly cruel, and calloused towards us in many ways. But in a funny way, I believe it all to be what was necessary for me and her to change our lives so drastically! Sitting here now from my bedroom in my mate Brady Leffler’s East Hollywood flat, I’m reminiscing about all that’s taken place, and all that is about to take place, and I’m excited. Me and Xarah have many plans out here, and it feels so good to be working and creating again. Most of all though, I do miss my teammate. She’s my best friend, and it’s very hard to function properly without her. She’s my rock, and even though it’s only a week and a half until I get to see her again, it feels like an eternity! Haha but that’s how these things go I guess.

Where do you see yourself in five years?

On tour somewhere, sun on my face, cold beer in my hand. Would love to have a kid by then too. I know it’s probably not very rock and roll of me, but I like the idea of having a little one kicking about. Kids are the best, and both me and Xarah think we’d make pretty cool parents. In the meantime, I’m gonna keep making records, and doing what I love. I ADORE performing, and will do anything I can to make sure that I do it for as long as my body allows me…

Brighton is an eclectic city for people with eclectic tastes. Walk down any street and you’ll see people dressed in every conceivable style with…