Fiona, we’re very excited to have the opportunity to interview you here at Beauty & Ruin Magazine– I have to admit that we’ve at least one fan of yours in the B & R office. We know you’re super talented – in fact you’re a composer, orchestral arranger and excellent violinist. Did you begin studying music at a very young age? We’re really keen to hear about your musical background. 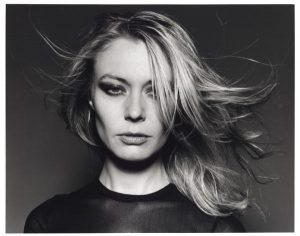 “My parents aren’t musicians but my Mum was a secretary and gave me a tape recorder with a microphone to play with when I was very young, maybe 4 or 5. I think that was the start of it because I used to make up and record little songs. I started violin aged 7 when they offered me lessons with a teacher at primary school. I taught myself piano until my parents found someone local to teach me. I don’t remember a time when I couldn’t read or write music. I still have manuscript books from when I was a kid and I was writing all the time. I grew up in Northamptonshire and played in the county orchestras every weekend but I also loved watching Top of the Pops and got really into Blondie, Madonna & especially Prince (spot the 80s child!). I spent hours watching bootleg videos from the ‘Sign of the Times’ and ‘Lovesexy’ tours when I should have been practising my violin, but it was all amazing music to me, I felt strangely comfortable somewhere between the rock’n’roll glamour of Debbie Harry and the angular emotion of Dimitri Shostakovich. I studied Music & German BA at King’s College London & the Royal Academy of Music, which was a lot of work and no fun, but moving to London was the best thing I could have done because that’s when I started playing in rock bands.”

We know you have a rep as being the ‘side-woman’ for Placebo (at least this is how Wikipedia phrases it). We’re huge Placebo fans at B & R and so of course this gives you crazy cred in our eyes. What’s the background with Placebo? How did it come about? 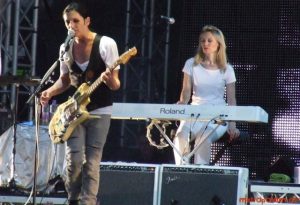 “I met Brian Molko and later Stefan Olsdal through gigs in London in the late 90s. I played violin with Dream City Film Club and they used to come down to see us sometimes. We had a lot of friends in common. I saw less and less of them because they were touring constantly and basically becoming massively successful, but we stayed in touch and in 2005 they asked me to write string arrangements for the “Meds” album, and again for the “Battle for the Sun” album. They invited me to join them onstage for a very special gig for MTV Exit at Angkor Wat (Cambodia) and I have performed with them live ever since. I don’t know about side-woman but I’m the only woman in the band.. just.. (Brian and I do share clothes sometimes..) ”

We know that as well as working with Placebo, you’ve toured with some famous faces including Kanye West, the Sugababes, Boy George and Westlife. What were those experiences like for you and do you have any horror stories? (we’re thinking Kanye…) 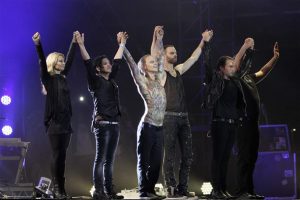 “Most of the artists I have worked with have been completely down to earth and professional but there are a few moments when you just think “Twat”. Kanye? Hmm.. He is best described ‘pre-’ and ‘post-’ Golddigger. ‘Pre-’ he was quite involved in the studio with the musicians, but ‘post-’ I just recall him swanning in and out of the studio with a massive entourage all wearing matching gold chains, carrying a load of Gucci shopping bags and being more interested in the dancer auditions than the recording session. But hey, I was just a session violinist and that’s simply how I saw it. I don’t know the guy personally. He certainly delivered a great performance onstage. I’m sure the public get a feel for an artist’s true personality over time anyway. Boy George? Fabulous. Beyonce? Incredible. Jarvis Cocker? Amazing. John Grant? Über-talented and also hilarious. No one will be surprised by that. Leona Lewis was actually pretty rude. Maybe she was nervous.”

Your debut album; ‘Postcards From’ is set to be released next month and we’re seriously looking forward to it. Talk us through the highlights and the inspiration behind it. What do you like most about the new album? 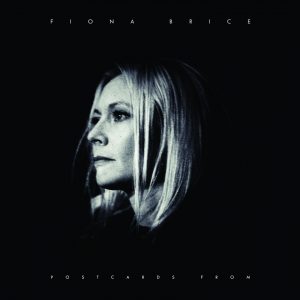 ” “Postcards From” is an instrumental album (violin & effects pedals, piano, cello). There are ten tracks, all written on location. I get inspired to write when I’m travelling, so I had accumulated manuscript sketches from different cities which I brought back to Din Sound in London to record with co-producer Julian Simmons. These ‘Postcards’ are personal, they are an illustration of my mood in a place at that specific time. I’m not trying to represent a whole city in music. As I am always working on other people’s music, it was difficult to prioritise and recognise value in my own work, but I played the tracks to a few colleagues and was encouraged enough to complete an album’s worth. I am proud of the fact that this record is a true combination of classical and non-classical music, because I have spent most of my life in between the two and I don’t really like those boundaries. In some ways it is classical in composition, but the recording process was much more experimental and alternative, it is being released by a fantastic indie label (Bella Union) and so I will hopefully end up doing gigs in both sweaty rock clubs and posh concert halls. A friend described me as “refusing to be pigeon-holed”. I like that. The potential flip-side is that no one will understand how to promote it and I won’t get any radio play because I’m a misfit. Fuck it. It’s just who I am.”

What’s next on the horizon for Fiona Brice?

“I am lining up a few solo gigs to promote the album over the summer, and I will be playing violin for Roy Harper on a short UK tour and then of course I will be joining Placebo onstage for the ‘20 Years’ Tour later this year. We’re playing the Brighton Centre on 14th Dec and I’m anticipating an up-for-it crowd! I’m also working on some film music and will be on the beach as much as possible this summer before getting back on the tour bus. ”

Thanks so much for speaking to us Fiona – we really appreciate it and we hope to have you back in the future for a catch-up – B & R wishes you the best of luck!

AS fashion embraces a relaxed and earlthy aesthetic, so woollens return to the spotlight once more. Handicraft heritage aside, however, there’s nothing traditional about…