We get some great opportunities here at Beauty & Ruin magazine. Brighton has such a rich tapestry of alternative culture, full of creative, beautiful, colourful and motivated characters. Many of these Brightonians come from far and wide to populate our bubble of cool. I caught up with four such individuals, Brighton’s own Of Empires band, who have just released their latest EP recorded at Metropolis studios following the likes of Amy Winehouse and Adele and fresh from winning MTV Brand New Unsigned last year: 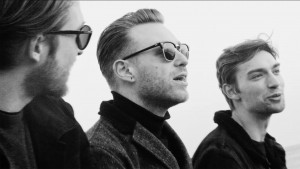 Can you give us a brief history of the band?

We all grew up in a tiny island called Guernsey and we all met there. I was playing in a few other bands at the time and Matt asked me when we were drunk at a music festival, if I wanted to be in a Rock ‘n’ Roll band and I said yes; in a drunken, messy haze, OE was born and it’s been that way ever since! We poached our drummer George from another band and Liam came along later when our first bassist quit just days before our first gig. Liam learnt all the songs in just a few days, so off the back of that we hired him straight away!

Where did the name ‘Of Empires’ come from?

Haha pass! We made it up and it just stuck. Whenever a person of the older generation asks us what we’re called, they always mishear us as Of Vampires! We also go by the name OE too. Of Empires, I guess gives us a British’y vibe, although there was a lot wrong with the British Empire, a lot of good came out of it too, like Rock ‘n’ Roll and the Vindaloo! Got to be proud of that. 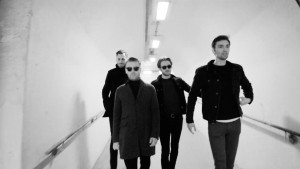 So what was it like to be MTV’s Brand New Unsigned Winners of 2015?

Very cool, and to be honest a complete surprise. It’s a nice title to have, and was a great boost for us at the time. The coolest thing about it was being on MTV Rocks,  and having our video play alongside massive artists like Kasabian and the Black Keys.

Who is the lyricist of the band?

I am the lyricist! Liam and Matt can sometimes be my muse however, especially when we’re mashed at 2 in the morning on a Saturday night. They’ll either talk absolute nonsense or say some of the most profound shit you’ll ever hear and I’ll write it down and put in a song! I’ll write about anything really, I do like to read a bit of Hunter S or Bukowski and my most prized possession is a present from my girlfriend. It’s a collection of poems titled the Outlaw Bible of American Poetry. Bloody good inspiration! I also love The Doors, Rolling Stones and all those classic Rock ‘n’ Roll bands from the 60’s, the ones that dared to offer that mirror reflection on this crazy world we live in and write about it. I like to write about sex, murder, corruption and love! Haha. 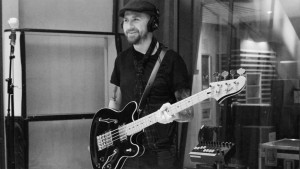 You’re all good looking guys and you even have a Burberry model in the band. Do people often remark on your svelte image?

Haha why thank you! Yeah, George is the talent there really! It really doesn’t cross our minds buy yeah I guess we get the occasional comments. It just comes with the territory of being in the band whether you’re good looking or not. As much as those comments can be flattering, for us it’s all about the music and it can get distracting…. but please don’t stop! The svelte image is just because we’re massive fans of the Rolling Stones and learned from the best. 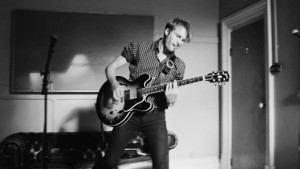 What would you say are the biggest obstacles ahead of you as a band?

Although it’s getting a lot easier for new bands to get out there because of the internet, the web doesn’t necessarily make it easier financially. Because streaming is the new way people are consuming music, it certainly means that new, up and coming artists like us, make little to no money from our music. This makes it very difficult to fund recording, rehearsing and touring, the very things you need to do, to get out there. We’ve been lucky enough to have some people help us out, and publishing is the way to go for bands at the moment, but it’s still bloody hard. It does seem all the big bands at the moment, seem to be from middle class backgrounds, and there are no working class bands at the moment. It’s tough out there! Oh, and there’s also the Great British Death of the Local Music Venue! As if it wasn’t hard enough already! There’s too much fuss about stats in the industry and not enough focus on the bigger picture or the fucking song or letting the artist express how they feel. No one seems to have balls! Rock ‘n’ Roll is by no means dead, there’s just a hell of a lot of incredible artists underground at the moment for a lot of reasons. Us rock bands have all got to collectivise and take it back mate!

Your new EP was mixed by Ian Dowling, how did it feel to work with someone who previously worked with the likes of Adele?

The EP doesn’t have a title yet but our latest song is called Baby Darlin Sugar on  the EP. It was amazing and inspiring to be working with guys of that kind of calibre. Our producer Ian Davenport, produced two of our favorite albums by Band of Skulls!  The way he works with artists is very much based on feel, capturing that vibe, and when you see him dancing in the cockpit, well you know you’ve got a good take! He also has awesome sideburns too. He wanted us to go for a live feel, to capture the energy of our performance, his main objective was to keep it organic and raw, to keep that live energy, just like rock ‘n’ roll should be. He was an absolute pleasure to work with. Ian Dowling, who you mentioned, finished off the record on mixing duties, he too was an absolute pleasure and inspiration to work with, his passion for the artists vision is incredible, he has worked with some amazing musicians in the past from Kasabian to Catfish and the Bottlemen, so it was an absolute honour to work with him. He also has great taste in shoes! 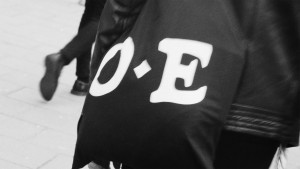 Since winning MTV’s Unsigned award, you seem to have signed a management deal, can you tell us more?

Yeah, we have an amazing management team that have really helped us with things that we would have otherwise found immensely difficult to do ourselves, they take that burden off us and enable us to concentrate on the music. They’re also very passionate about what they do and they get the vision of the band too. It’s important to have the right team, and I feel we do.

‘Baby Darlin’ Sugar’ was recorded at Metropolis Studios, how did that opportunity come about?

We’re signed to Metropolis Music Publishing, the publishing wing of Metropolis Studios. We are the luckiest sods in the world to be working there. 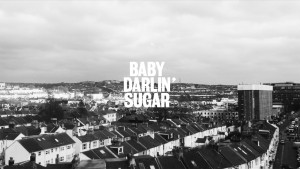 What was it like knowing you recorded in the same studio as musical legends such as Michael Jackson and Amy Winehouse?

It was an amazing experience which we will never forget. It was quite overwhelming walking through the doors of Metropolis and seeing those huge mixing desks, the calibre of artists that pass through those doors are all legends! Then there’s us, four lads in our little rock ‘n’ roll band making a fucking record where the likes of MJ and Amy Winehouse have stood! It’s nuts. It was hard to take in at first, but once the initial awe of it all subsided, we knew we had work to do, overall it was incredibly fun.

Where do you see yourselves in five years’ time?

Same thing we’re doing now but much, much bigger!!

You can watch Of Empires latest video to ‘Baby Darlin’ Sugar’ right here:

And if you want to connect with Of Empires here are all their deets:

Keep an eye on Beauty & Ruin for future updates on the OE boys – we’ll be running a future feature on their EP once it gets a full release.

A great smile not only makes you more attractive, it can also boost your self esteem and confidence when you talk. But all of…